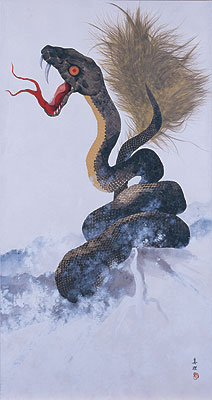 "Jintai-sai" is a festival that has been held in the land of Izumo since ancient times. The dragon-snake that is the messenger of the sea-god emerges in Izumo Bay. With black back and yellow belly, it is believed to have the divine-print fan on its tail. The snake is coiled and has its jaws wide open as if blowing fire, symbolizing that it drives away impurities. The month of October is called "Kanna-zuki" in traditional Japanese. It is a time when the myriad deities of the country gather in the homeland to pay respects to their mother Izanami who had passed away. The month got its name because all of the deities in the country leave their homes from that special time of the year and the country becomes "god-less." On the other hand, Izumo plays host to all of the gods and celebrate the "presence of the deities," therefore, "Jintai-sai." All evil and misfortune are driven away when impurities are washed away into the waters of Izumo, the land sanctified and the gods are sent off to their homes. When the deities become absent, the country becomes vacant temporarily, thus removing all impurities and hence bringing forth new life. "Iwakura" denotes a dark hole that is storage place and is also the symbol of the womb. Rebirth through cleansing and sanctification is made possible with temporary return to the womb and shedding off. By passing through the "kura" purity is restored and all evil washed away. Iwakurazajo-hebi-zu shows the ferocious dragon-snake god driving off evil in the "kura," the place of sanctification. It has been dedicated to the gods of Izumo.