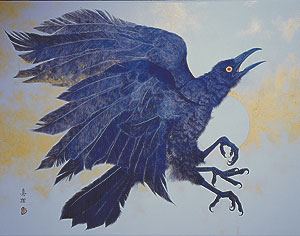 Kojiki, the chronicle of Japan's mythical origins, tells of Kamu-yamato-iharehiko-no-mikoto (later Emperor Jimmu) crossing the sea and traveling from Kumano to Yoshino with the guidance of the heavenly messenger Yatsugarasu. This is reportedly due to the belief that the deity of cereal crops appears from the eternal country Tokoyo-kuni across the sea and that Kumano is believed to be the link to Tokoyo-kuni and Ne-no-kuni. Tokoyo-kuni is believed to be the source of all life lying beyond the sea and to be where crops come from. The Japanese have traditionally considered the east where the sun rises and the west where the sun sets are places where deities dwell. The Yatsugarasu, the messenger of Amaterasu, served as guide for the son of heavenly deities Emperor Jimmu's eastward journey. As messenger of the sun goddess, the crow is said to carry the sun on its back. Also, it is depicted with three legs. The number three symbolizes heaven, earth and man?or, wisdom, benevolence & courage?that are the blessed gifts of Ketsumi-no-miko-no-ookami (Susanoo-no-miko) enshrined in Kumano Hongu Taisha. The odd number three also suggest the blessings of sunshine and rich harvest. This drawing has been dedicated to the gods of Kumano in prayer that the cycle of summer sun bringing the riches of autumn proceeds smoothly.