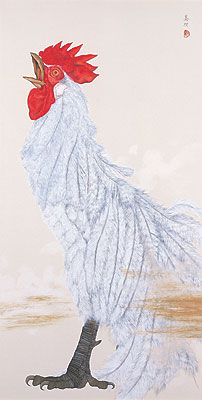 A well-known tale in the chronicle of Japanese mythology Kojiki is the story of Ama-no-iwato. The ferocious and stormy god Susanoo-no-mikoto bores a hole in the sacred chamber of the great goddess of light-in-heaven Amaterasu-oo-mikami and drops a flayed horse into the chamber, which causes the weaver-maiden to die from shock. Seeing this, Amaterasu withdraws in fear and embarrassment into the Ama-no-iwato (Heavenly Cave). Her absence causes unending darkness in the entire world. The malicious deities began to raise ruckus and bring chaos. For this reason, the myriad deities assembled on the bank of the river Ama-no-yasukawa to discuss how the problem can be solved. After great examination of solutions, the wise god Omohikane-no-kami thought of making the rooster Tokoyo-Naganadori cry. "Tokoyo" signifies the eternal world, which is believed to be beyond the sea and to be the place where all life comes from. The Naganadori is a rooster that gives a very long cry, meaning that it has very long breath and therefore of the eternal world. Its cry is believed to sweep away all evil and bring the sun. As the messenger of the sun goddess, it was appointed the first creature to bring the goddess out of the cave. The rooster symbolizes west and the color white. A white rooster has been worshipped for ages as a god on earth that drives out evil and purifies the world. The story of the Ama-no-Iwato tells of how the sun goddess went into hiding and returned as a new god with the call of the sacred bird. The painting has been drawn in prayer of the Tokoyo-naganadori sweeping away evil and purifying the world for the near year to bring great bounty. It has been dedicated to the god of the city in the direction of the Rooster.