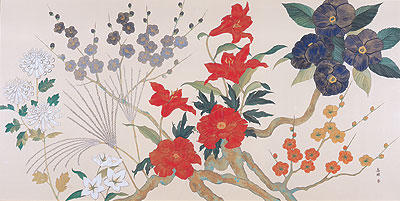 A poem in Kojiki, the chronicle on the mythical origin of Japan, tells of a giant magical tree extending its roots deep in the earth, with its top branches encompassing the sky, the middle branches covering the nation in the East, and the lower branches covering the countryside. Chaos is divided into Light and Darkness, and creatures spring forth. The creatures are brought under the giant tree, which brings continuity to the flow. It has all life in its fold, stimulating flow of the cosmos from the hidden to the apparent and to hidden again. In the change of the seasons, flowers bloom and wither-- life is renewed in the flow of the cosmos. In ying-yang and the Five Elements, winter is symbolized by north and the color black, spring by east and the color blue, summer by south and the color read, and autumn by west and the color white. The periods of time that fall between seasons (doyou) is yellow in color. Winter and fall are forces of ying; spring and summer the forces of yang. In terms of numbers, even numbers are forces of ying, and odd numbers, forces of yang. Winter representing ying (darkness) that creates the flow is shown in black with one type of black flowers, spring (yang) with two types of blue flowers, summer (yang) with two red flowers, and autumn (ying) with three white flowers. Doyou, which is often symbolized as gates, is shown with the north-east gate stimulating the flow, south-east gate creating the flow, the south-west gate shown with a short flow because of the heat, and north-west gate, being the divine gate, shown with yellow colors for bringing in life from the place of the gods. The Tree of Life was drawn in prayer for bounty and as an expression of gratitude to the Universe.