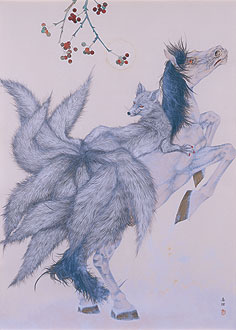 In Ying-Yang and Five Elements, odd numbers represent Yang, the force of light, while even numbers symbolize Ying, the element of darkness. The largest odd number is 9, which is regarded the largest number in Yang. The fox is an auspicious animal because of its small head and thick, bushy tail that spreads at the end (symbolizing prosperity in the future). The color of the fox is yellow, which represents the Earth in the Five Elements. The horse symbolizes South and fire. In the relationships of the Five Elements, the horse helps the fox, increasing its vitality. White is a color that symbolizes the element of metal and west in direction, with their relationship suggesting that white fox always bears metal. The drawing is auspicious in that a fox with nine tails is helped by a horse constantly. Since it is white, it continues to bear metal (gold). The red, round berries above the fox provides greater emphasis on the force of metal. The white snow and westerly direction also signify greater good fortune. The fox is basically a creature of darkness (ying). By riding a horse that bears the ultimate in light at night under a full moon, both forces of ying and yang fills the world and helps the world move. The westerly direction also symbolizes a young girl in fortune-telling, suggesting that the white fox also plays the role of a young girl, another element signifying the element of metal. The drawing was created with maximum application of the principles of ying-yang and the Five Elements to pray for prosperity and happiness of the people.